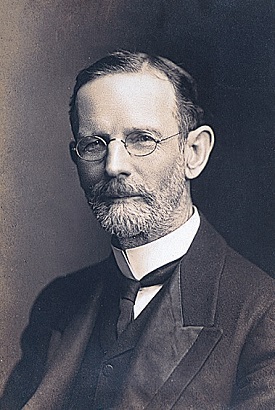 Kwansei Gakuin was originally founded in 1889 at a wooded place called Harada in Kobe (now the site Oji Zoo) by W.R. Lambuth, an American missionary who had been sent to Japan by the Methodist Episcopal Church. In 1929, Kwansei Gakuin moved to its present site of Uegahara, Nishinomiya.

The present high school building and chapel, which were built in 1989 to commemorate the school’s 100th anniversary, replaced the original high school buildings. The new building, equipped with sophisticated educational facilities, enhances the scholastic standard of the school. The chapel, which accommodates an audience of 1200, functions not only as a center for religious activities but also as an auditorium for various cultural activities. These new buildings represent the next phase of Kwansei Gakuin High School’s endeavor to serve and contribute to the world in good faith through the power and possibilities of education.

The university’s fourth president, C.J.L. Bates, a missionary from the Canadian Methodist Church, advocated “Mastery for Service” as the mission for Kwansei Gakuin to follow. This phrase has been the school motto ever since. From the beginning, through encouraging attendance at chapel services, the pursuit of academic achievement in class, and involvement in extra-curricular activities, Kwansei Gakuin Senior High School has been dedicated to the character building of its students as good and God-respecting citizens. In particular, extra-curricular activity involvement provides students with opportunities to cultivate their ability to develop a harmonious blend between their individual freedom and the social obligations imposed on them as members of the clubs they belong to and members of the student body in general.

At present, Kwansei Gakuin High School, as a part of the larger Kwansei Gakuin education complex, enjoys the prestigious position as one of Japan’s most advanced private education institutions. Ranging from grades 10 through to 12, the high school boasts over 900 highly talented students, most of whom pursue their careers at university.